Edinburgh Eastern MSP Ash Regan has welcomed commitments in the 2021-22 Scottish budget that set Scotland on a path to a Just Transition while securing hundreds of thousands of oil and gas jobs.

Finance Secretary Kate Forbes announced the first £20m of the 10-year £500m being invested by the SNP Scottish Government into a Just Transition. The investment will increase year-on-year.

There were also other spending commitments in the budget to make Scotland greener, including £350m towards decarbonising one million homes across Scotland, and the equivalent of 500,000 domestic homes by 2030.

“The SNP Scottish Government continues to recognise the importance of our Just Transition away from fossil fuels – bringing jobs, communities and business along on that process to ensure that lessons are learned from the past and no one is left behind.

“The SNP is serious about our responsibility to move workers into green jobs for the future with £500m investment in the Just Transition fund.

“We have already seen workers benefitting from the Green Jobs Fund – with 750 green jobs already created through the project.

“It is disappointing that we do not see the same commitment to green jobs from the Tory UK government as they failed to invest in carbon capture, letting down the people across Scotland – they must immediately reverse that decision.

“This shows why we cannot trust the Tories to protect the future of energy jobs in Scotland. We must be able to choose a better future in an independent country.” 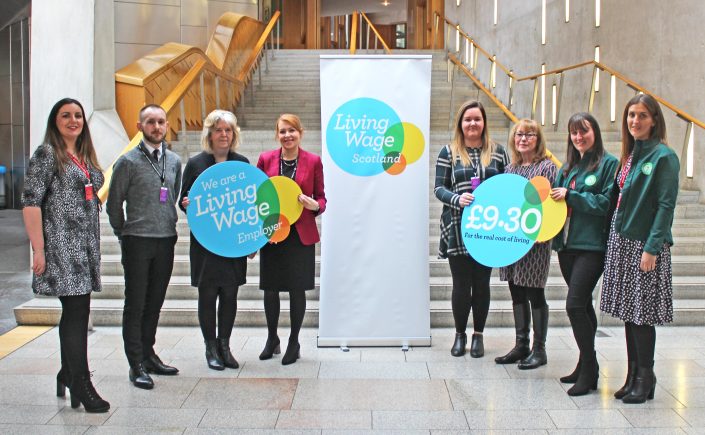 Ash Regan MSP has written to businesses across her Edinburgh Eastern constituency to promote the real Living Wage and has encouraged them to consider signing up to the scheme.

The real Living Wage, which is a scheme supported by the Scottish Government, is an independently calculated rate based on the costs of living and is paid voluntarily by employers. The rate is currently £9.50 and is calculated each year in November by The Resolution Foundation on an analysis of the wage that employees need to earn in order to afford basics such as housing, childcare, transport and heating costs for a decent standard of living.​

The real Living Wage is higher than the National “Living Wage” and, unlike that UK government-set rate, applies to everyone aged 18 and older. Studies have shown the numerous benefits to employers of paying the real Living Wage, including a higher quality of work, improved morale, lower absenteeism, and retaining more staff.

“I am delighted to support the real Living Wage by writing to local employers asking them to consider signing up to the scheme which would see them pay their employees and all contracted workers a wage which can afford the costs of living.

“Studies have demonstrated the numerous benefits to both employers and employees of paying the real Living Wage, with businesses reporting a higher quality of work, better morale, lower absenteeism, and being able to retain more staff.

“In return, employees feel more valued and crucially can afford the basics in life and can have that opportunity to save money or even to give up an extra job so they can spend more time with their loved ones.

“It has been encouraging to see 7 local employers become newly accredited in the past 12 months so I hope we can see even more signing up as part of this local campaign.”

Ash Denham MSP has written to the City of Edinburgh Council to ask if and when it intends to commit to moving the Capital towards becoming a Living Wage City.

Such an announcement would follow in the footsteps of Scotland’s only current aspiring Living Wage City, Dundee, which made the move in 2019 after launching a city-wide action plan in collaboration with Real Living Wage Scotland to drive uptake of the accreditation scheme.

The Real Living Wage scheme is one supported by the Scottish Government and encourages businesses to pay their employees and all regular third-party contracted staff a wage which at a minimum has been independently calculated based on living costs.

Now the MSP for Edinburgh Eastern, who has been a champion for the Real Living Wage within her constituency and made it a key re-election commitment to encourage more businesses to sign up, has requested a timescale for when it is hoped the City will move towards becoming Scotland’s second Living Wage City.

“This scheme makes a real difference because instead of employees struggling to make ends meet every month being paid the real living wage helps to lift more people out of in work poverty.

“For these reasons and others I have worked to champion businesses in my constituency who have become accredited Living Wage employers and I held an event in Parliament in February 2020 (pictured) to meet local employers and their employees to hear first hand how this scheme has improved their lives.

“My office wrote to the council in 2019 stating that I would fully support making Edinburgh an aspiring Real Living Wage City and I am optimistic we are now close to realising that ambition. I have written to the Council to ask if any timescales have been put in place to move towards this objective and have offered to do anything I can to support it.”

Edinburgh Eastern MSP Ash Denham is encouraging eligible families in her constituency to apply for a grant to help with the cost of school uniforms.

The announcement marks another delivered manifesto commitment in the first 100 days of the SNP in government following May’s Scottish Parliament elections.

Since first being elected in 2016, Ms. Denham’s constituency office has been used as a drop off point for those wishing to donate to the Edinburgh School Uniform Bank.

“I’m delighted to see that an agreement has been reached that will increase the national school clothing grant to a minimum of £120 per primary school child and £150 to those attending high school, for eligible families.

“This school clothing grant will help to relieve some pressure for around 145,000 families across Scotland – including many in my Edinburgh Eastern constituency – and it will help to ensure that all children can go to school feeling comfortable, confident and ready to learn.

“I encourage all constituents who believe they may be eligible to apply through the City of Edinburgh Council.”

Constituents can apply on this link: https://www.edinburgh.gov.uk/food-clothing/free-school-meals-school-clothing-grants

Ash Denham MSP has written to the Cabinet Secretary for Transport to seek the establishment of a Community Bus Fund.

The Fund was a pledge within the SNP Holyrood manifesto and the Edinburgh Eastern MSP would like to see it rolled out as soon as it is practical.

Last month Ms. Denham met with the Community Transport Association charity and the Lothian Community Transport Services to hear how such a fund could support even more people across the Capital and Scotland to access vital public service and employment opportunities.

“People across Edinburgh rely on transport services to enable them to lead independent lives – whether that’s accessing public services, going to work or to volunteer, buying food and medicines, or meeting with friends and family.

“I was re-elected on a local campaign pledge to improve public transport services in the constituency and so I have written to the Scottish Government to ask for a Community Bus Fund to be established as soon as possible.

“This Fund – which was a pledge within the SNP manifesto – will support the provision of services across the Capital by allowing the City of Edinburgh Council to look at delivering bus services in a different way.”

“At the Community Transport Association, we know that long term investment from Scottish Government, plugged into community transport operators will empower them to serve their communities and be part of a thriving, integrated transport system for Scotland.”

Forming the Group was a key local pledge in her re-election campaign and its aims include identifying the specific mental wellbeing needs of the constituency and to ensure there is more support in place for those struggling with poor or ill mental health.

Ms Denham intends to invite a number of local and national third sector organisations who provide support in the area as well as NHS Lothian to be members of the Group and to contribute to its meetings.

Commenting on the plans for the Group, Ms. Denham said:

“One in three Scots are affected by ill mental health every year and in this next session of Parliament we will need to do more than we have every done before to support them.

“The SNP in government will increase mental health spending by at least 25% over the course of this Parliament and will put a dedicated mental health link worker in evert GP practice across the country.

“But it’s incumbent on all MSPs to take individual actions on a local level as well. I will do that by organising and chairing an Edinburgh Eastern Mental Health Action Group to identify the specific needs of the constituency and take urgent action to improve access to support and services.

“I will be inviting a number of stakeholders – including third sector organisations working in mental health and NHS Lothian – to take part and contribute.”

I opened and closed the stage one debate on the Damages (Investment Returns and Periodical Payments) (Scotland) Bill.

The Justice Committee held a debate on remand. I spoke to open and also close the debate for the Scottish Government.

I responded on behalf of the Scottish Government to the Members’ Business Debate: The Cycle to Syracuse to Mark the 30th Anniversary of the Lockerbie Disaster.

I answered two Justice and the Law Portfolio Questions.

Jamie Halcro Johnston asked what action the Scottish Government is taking in response to the reported increase in incidents of antisocial behaviour.